Memory in Discourse: Approaching Conflicting Constellations of Holocaust and Postcolonial Memory in Germany

In today’s Germany, the memory of the Holocaust has become institutionalized. However, its institutionalization should not be mistaken for stability. In fact, Holocaust memory has been and still is questioned and contested. At the same time, a global phenomenon, postcolonial memory, is receiving increased attention in Germany. As postcolonial memory is better understood, new questions are arising about Germany’s memory culture in the twenty-first century. Precisely because of Germany’s experience with National Socialism, the memory of colonialism exists in a memory space that is heavily influenced by discussions of the Holocaust. The memories of the two phenomena appear in constellations that conflict with each other. In this paper, I address the two conflicting constellations of Holocaust memory and postcolonial memory, and propose a discursive perspective on Germany’s memory culture. Analyzing a national memory culture as a creation of discourse provides an opportunity to resolve the argumentative standoff between Holocaust memory and postcolonial memory, and instead put German memory culture itself at the center of criticism. 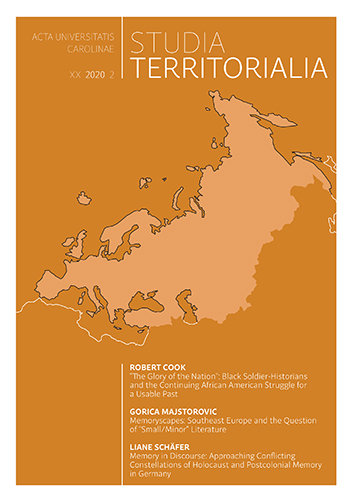 This work is licensed under a Creative Commons Attribution-NonCommercial-NoDerivatives 4.0 International License.

Make a Submission
ISSN 1213-4449 (Print)
ISSN 2336-3231 (Online)
AUC Studia Territorialia is an open-access journal. The journal and the contributions therein are distributed under the terms of the Creative Commons Attribution-NonCommercial-NoDerivatives License, which permits use, distribution and reproduction in any medium, provided the original author and source are credited, the use is non-commercial and no modifications or adaptations are made.